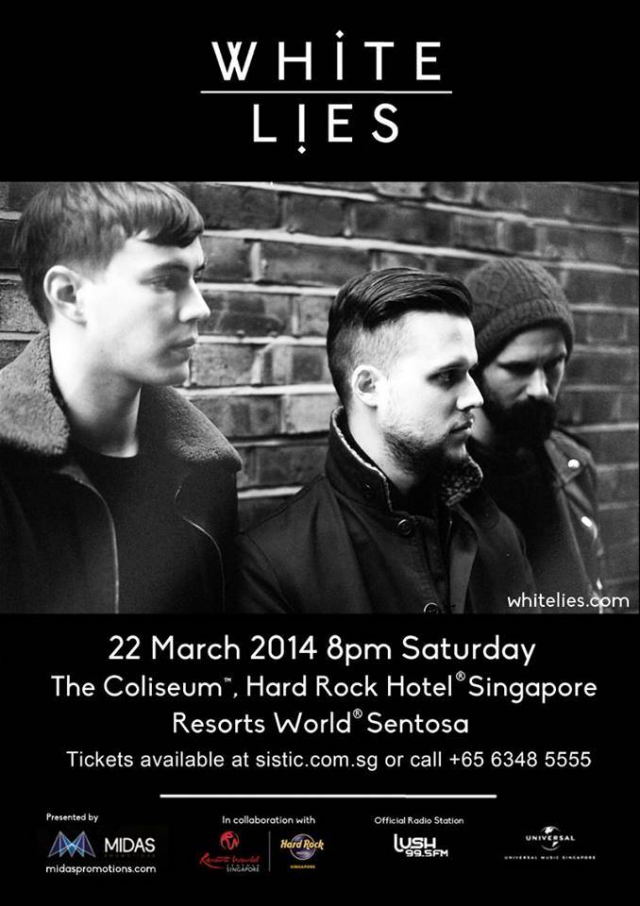 Hailed as the next Great White Indie Hope, White Lies’ musical style has been described as dark yet uplifting by the media, drawing comparisons to Joy Division, Editors, The Bravery and Interpol. This electrifying indie rock band was formed in Ealing, London on October 2007 with members Harry McVeigh, Charles Cave and Jack Lawrence-Brown.

The release of singles “Unfinished Business” and “Death” led to tours and festival appearances in the United Kingdom and North America, including a headline performance at BBC Radio 1’s Big Weekend and a place on the 2009 NME Awards Tour. At the beginning of 2009, White Lies was featured in multiple “ones to watch” polls for the coming year, including the BBC’s Sound of 2009 poll and the BRITs Critics’ Choice Award.

Their second album Ritual was produced by Alan Moulder from Depeche Mode and was released on 17 January 2011. The band supported Muse at a number of European stadium shows between June and September 2010, and played the 2010 V Festival in the United Kingdom.

BIG TV, their third and latest studio effort, was released on 12 August 2013. The album debuted at no. 4 on UK Albums Chart and the band also they made their Main Stage debut at Reading and Leeds Festivals. It has been announced that the London trio is on the lineup for 2014’s Coachella music festival.