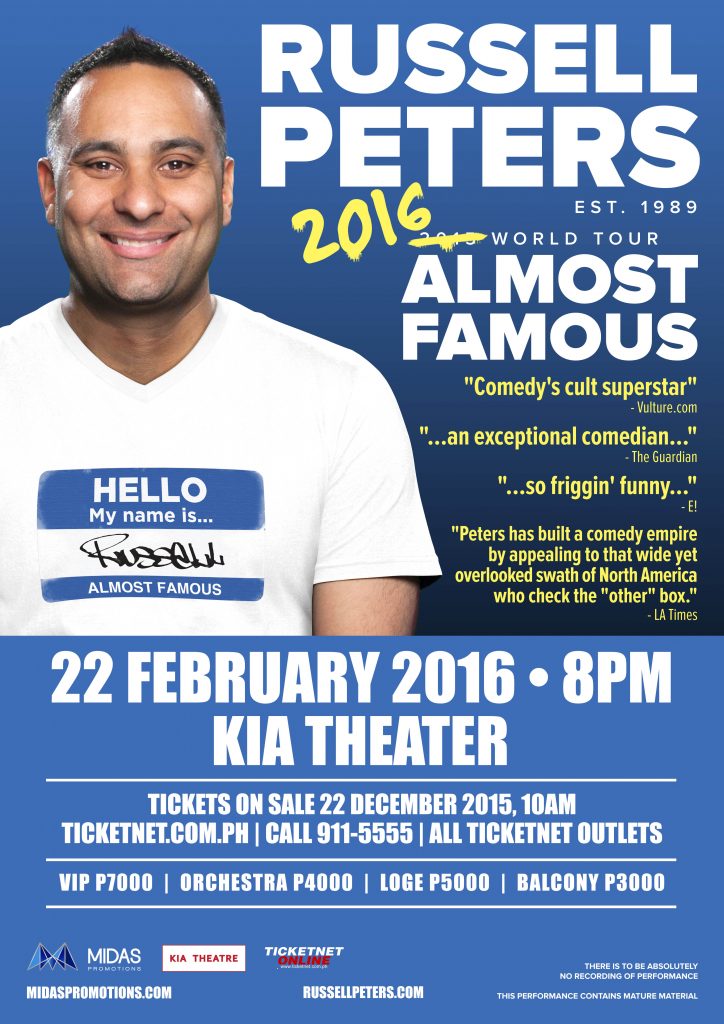 Global comedy rock-star RUSSELL PETERS announces his show in Manila with his ALMOST FAMOUS WORLD TOUR on 22 February 2016 at the Kia Theatre! On sale now via TicketNet.com.ph or call 911-5555!

The ALMOST FAMOUS WORLD TOUR will feature Russell’s latest take on some of his favourite communities, jobs he can understand, cell phones, dating and his uncle who’s never been punched in the mouth, plus Russell’s signature lightning fast improv with the audience. “I like to interact with the front rows,” says Peters of his signature back and forth with the audience.

“I use the interaction to take me from bit to bit. Some guys go on-stage with a script and don’t deviate from it. That’s not my style. I have my set and know what I want to cover; I just use the audience to move me in certain directions. It’s very collaborative and each show is unique.”

“The audience left the venue with smiles on their faces and tears in their eyes, as Peters managed to nail them with his witty observatory comedic style and jokes about ethnic and cultural stereotypes.” – The Nation

“Peters is constantly thinking up new material. He says his newest bits for the Almost Famous tour are less about lampooning cultural differences and more about “the culture of being Russell.” – LA Times

“…an exceptional comedian. He’s obviously a natural performer…” The Guardian