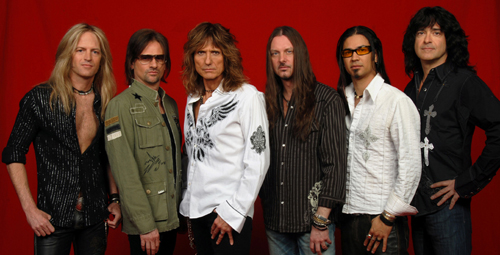 Whitesnake are an English rock band, founded in 1978 by David Coverdale after his departure from his previous band, Deep Purple. The band’s early material has been compared by critics to Deep Purple, but by the mid 1980s they had moved to a more commercial heavy metal style. The band’s 1987 self-titled album was their most commercially successful, and contained two of their most recognisable songs, “Here I Go Again” and “Is This Love”.

David Coverdale founded Whitesnake in 1978 in North Yorkshire. The core line-up had been working as his backing band The White Snake Band on the White Snake album tour and they retained the title before officially being known as Whitesnake. They toured with Coverdale as his support band and for both of the solo albums he released, White Snake and Northwinds, between exiting Deep Purple and founding Whitesnake. At this time, the band was made up of David Coverdale, Bernie Marsden, Micky Moody, Neil Murray and drummer David “Duck” Dowle with keyboardist Brian Johnston. Johnston would soon be replaced by Procol Harum organ player and keyboardist Pete Solley. Because of Solley’s producing commitments he was replaced by the former Deep Purple keyboard player Jon Lord, during sessions for the first LP.

In 1981 the band recorded the album Come an’ Get It which climbed to #2 in the UK album charts and produced the Top 20 hit “Don’t Break My Heart Again” and the Top 40 hit “Would I Lie To You”. The album flopped in the US. During 1982 Coverdale took time off to look after his sick daughter and decided to put Whitesnake on hold. When David Coverdale returned to music he reformed the band and after the recording of the album Saints & Sinners replaced Bernie Marsden, Ian Paice and bass player Neil Murray with Mel Galley from Trapeze, bassist Colin Hodgkinson, and Cozy Powell as the new drummer.

Saints & Sinners was another Top 10 UK album and contained the hit “Here I Go Again” which featured guest keyboard player Malcolm Birch from Chesterfield based band Pegasus. The new lineup toured in 1982–83, headlined the Monsters of Rock Festival at Castle Donington UK in August 1983 and the single “Guilty of Love” reached #31 in the UK singles chart.