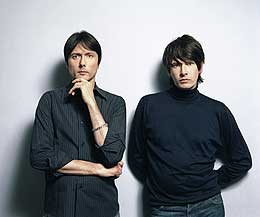 So… Brett Anderson and Bernard Butler back together. Who’d have thunk it? Well, Bernard for one apparently. “I always knew sooner or later it would happen,” he says.

And Brett too, for his part, seemed in the end to almost hasten the demise of Suede that he might meet up with Bernard and pop the question no-one else had ever dared form in their heads for the past 10 years.

“The first time we met [again] in December 2003, he said he wanted to form a band,” says Bernard. “Obviously, for years, I’d always wanted make the record.” And so they began, the best British song-writing duo since Morrissey and Marr, working together once again, writing with no particular aim in sight. Only later did they realise they were really onto something, something they had left undone in 1994, when Bernard walked out of Suede ahead of the release of their second album, ‘Dog Man Star’.

Slowly, yet inexorably, ‘Here Come The Tears’ came to be a shared labour of love; the thing that would define 2005 for both Brett and Bernard. “The music is really, really inspiring,” says Brett. “I don’t want to get dewy-eyed, but it’s so exciting to work with someone who cares so much about it. For years and years after Bernard left Suede it was me running the show, but now the stakes are raised. I feel like we are duelling with each other, in some kind of friendly competition. When we were at our best it was always like that, each trying to better each other.”

From the outside ‘Here Comes The Tears’ certainly feels like a work high on confidence, and performed by people at the peak of their artistic powers. Brett’s voice is stunning as never before – the little break in ‘Two Creatures’, the exquisite and moving swoops of ‘Fallen Idol’ – while Bernard simply plays guitar like no-one else alive.