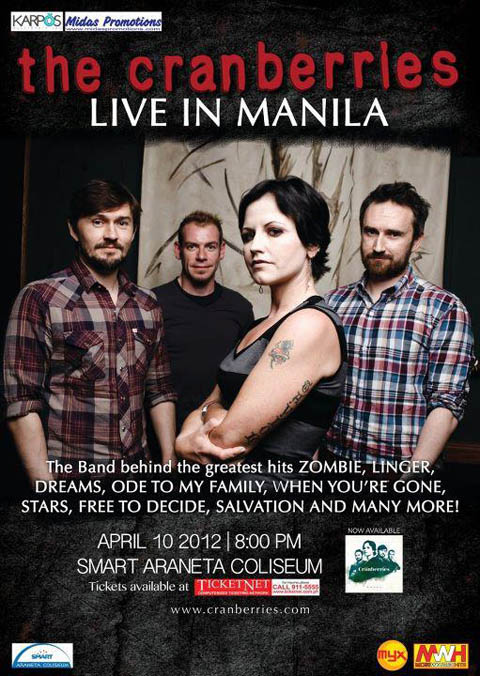 The Crandberries Live in Manila 2012

The Cranberries – one of the most successful mainstream rock bands of the 90’s are heading to Manila for a one night greatest hits concert on April 10, 2012 at the Araneta Coliseum.

Well known for their long line of hits that include Linger, Zombie, Dreams, When You’re Gone, Ode to my Family, Just My Imagination, Salvation, Stars, Promises, Animal Instinct, Analyse, Free to Decide, I Can’t Be With You, Ridiculous Thoughts and many more, the Irish group has come back from a 6 year hiatus in time for a new album and a world tour, with the Philippines as their fourth stop. The Cranberries, composed of members Dolores O’Riordan on vocals, Noel Hogan on guitars, Mike Hogan on bass and Fergal Lawler on drums have gained huge music success with four albums at the Billboard top 200, and eight top 20 singles. They’ve sold more than 15 million albums in the US alone and have garnered numerous awards at the prime of their career. Their songs have also been selected for making soundtracks of various movies and TV series like Click, Empire Records, The Next Karate Kid with Hilary Swank, Smallville, Mission Impossible, You’ve Got Mail, Clueless, and many more.

The show shall feature a nostalgic trip to the 90’s where sing – a – longs, swaying and crowd jumping are expected. Yet, viewers are also in for a treat as The Cranberries shall also perform songs from their new album Roses, which will be out February 27th, 2012 worldwide aside from the. The record features songs that encompass the original indie pop, post punk feel of The Cranberries sound. The carrier single, Tomorrow is already gaining radio airplay in various stations nationwide.