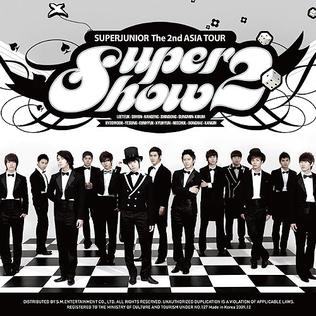 Super Junior excel in dance pop and to highlight each member’s talents, the group would divide into several units including Super Junior-K.R.Y., Super Junior-T, Super Junior-M and Super Junior-Happy, each of which adopts a different musical style. Whether it is a group activity or with a divided unit, Super Junior still win the hearts of their fans. Super Junior-M was in Hong Kong last year for two intimate shows that left fans craving for more.

Super Junior-T, on the other hand, worked with Japanese comedians Moeyan and released a single ‘ROCK&GO!’ in Japan to great acclaim. For a while the group was rumored to be called O.V.E.R, the acronym for “Obey the Voice for Each Rhythm.” However, before the group settled with their current name, S.M. simply referred to them as Junior, a representation of the members’ young ages when they first became S.M. trainees. After the members’ showcased their different talents to the company at a picnic, the company finalized their concept name to Super Junior. The group thereafter became officially Super Junior 05, the first generation of Super Junior. Leeteuk said on Star Golden Bell that “at first, Super Junior’s name was S.M. Junior, but after Lee Soo Man saw our performance, he said we have super talent and quickly change our name to Super Junior”.

Super Junior has released and contributed 20 records with varying degrees of success. Over the years, they have been divided into smaller subgroups, simultaneously targeting different music industries and audiences. Largely due to Super Junior’s success as entertainers, other Korean entertainment managements began to train their music groups in other areas of entertainment, such as acting and hosting.[6] In addition to their commercial success, Super Junior has earned six music awards from the Mnet Asian Music Awards, eleven from the Golden Disk Awards, and is the second singing group to win Favorite Artist Korea at the 2008 MTV Asia Awards after jtL in 2003.”