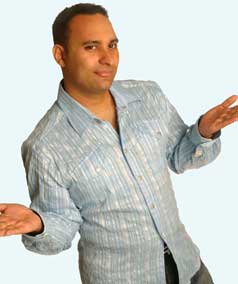 Russell Peters is already a comedy superstar in much of the world. During a recent tour of Dubai, Russell sold tickets at the rate of one ticket every two seconds – crashing all the online sales outlets as soon as the tickets went on-sale. In April 2005, Russell was the first South Asian to headline and sell-out the Apollo Theatre in New York City. In June 2007, Russell became the first comedian to sell-out Toronto’s Air Canada Centre – performing for over 30,000 fans over two nights.

In addition to this first-time feat, in February 2008, Russell became one of only a handful of comedians to ever headline and sell-out the world famous Madison Square Garden. Russell Peters is already a comedy superstar in much of the world. A recent one-off appearance at London’s Shaw Theatre sold out in 48 hours and when his first shows in Sydney and Melbourne were announced in May 2006, 10,000 tickets were gone in less than two days with zero advertising. In April 2005, Russell was the first South Asian to headline and sell-out the Apollo Theatre in New York City. Common knowledge decrees that a comedian must have a TV sitcom, a hit movie or a high profile comedy album to succeed, but Russell has built a massive underground following by word of mouth, completely bypassing mainstream media outlets. For the past few years he’s been selling out theatres across the US and Canada, all without ever appearing on network television in the United States. His US agents, Creative Artists Agency, calls this phenomenon ‘The Legend Of Russell Peters.’