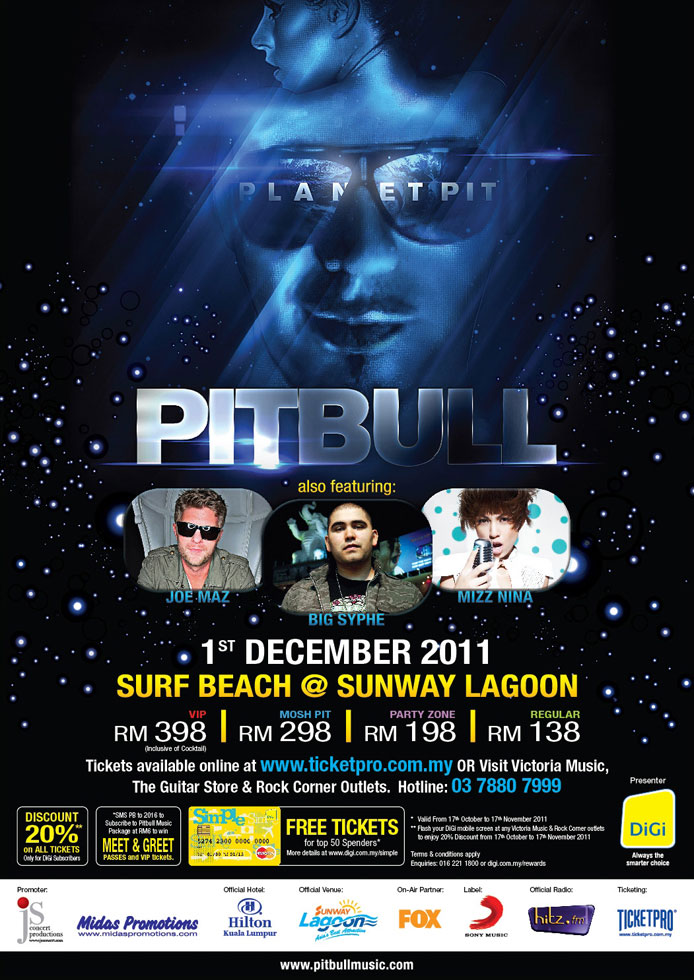 You need to generate a lot of heat if you want to be Mr. Worldwide, but if there’s one thing Pitbull has – besides a way with rapid-fire rhymes, billion-dollar beats, and globally infectious hooks – it’s charm by the boat load.

International music sensation Pitbull has sold millions of digital singles (including his current hit “Hey Baby” featuring T-Pain, the double-platinum smash “I Know You Want Me [Calle Ocho]”, “Hotel Room Service”, “Krazy” and “Culo”); scored two No. 1’s on Billboard’s Rap Albums charts (his gold 2004 debut M.I.A.M.I. and 2009’s Rebelution, which also debuted at No. 8 on Billboard’s Top 200 chart); and has been featured on tracks by such pop-chart mainstays as Usher, Enrique Iglesias, Jennifer Lopez, Shakira, and Janet Jackson.

Always impeccably dressed in a sharp suit and shades, Pit enters a room trailed by his pals happily bantering away in Spanish, a gorgeous girl, and members of his management team. Even while juggling a constant stream of incoming texts and emails on his two smartphones, Pit has the ability to make everyone he meets feel at home, addressing them as “Mama” or “Papo” and asking if they need anything. He’s the consummate professional: confident and charismatic – a true star.