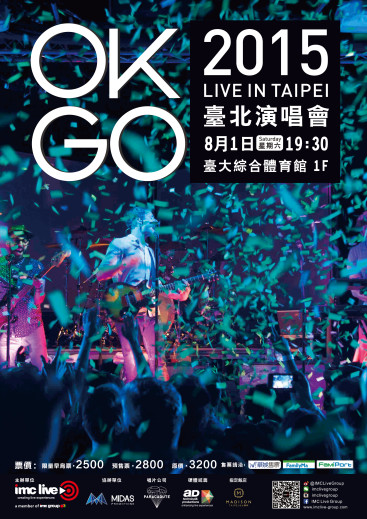 The limitless band OK GO has been praised by numerous fans for its creativity, the release of their music video always hit the click-through rates and shared everywhere on the internet. OK GO last performed in Taiwan in 2007 and after nearly eight years, they are finally coming back to Taiwan again! OK GO is set to perform in NTU Sports Center on 1st August 2015.

OK Go has earned considerable fame for their creative music videos, the band performed a complex routine with the aid of motorized treadmills most of which have been promoted through Internet video sharing sites like YouTube. This also won them the Grammy for Best Music Video Award. In 2007, OK GO performed at an outdoor stage concert, lead singer jump down the stage twice letting the fans in Taiwan feel their limitless madness. They have also grabbed Best Visual Effects from the MTV Music Awards, and Best Rock Video from the UK Music Awards. This time round, OK GO is bringing something new to Taiwan on the 1st Aug which will blow their fans mind away!