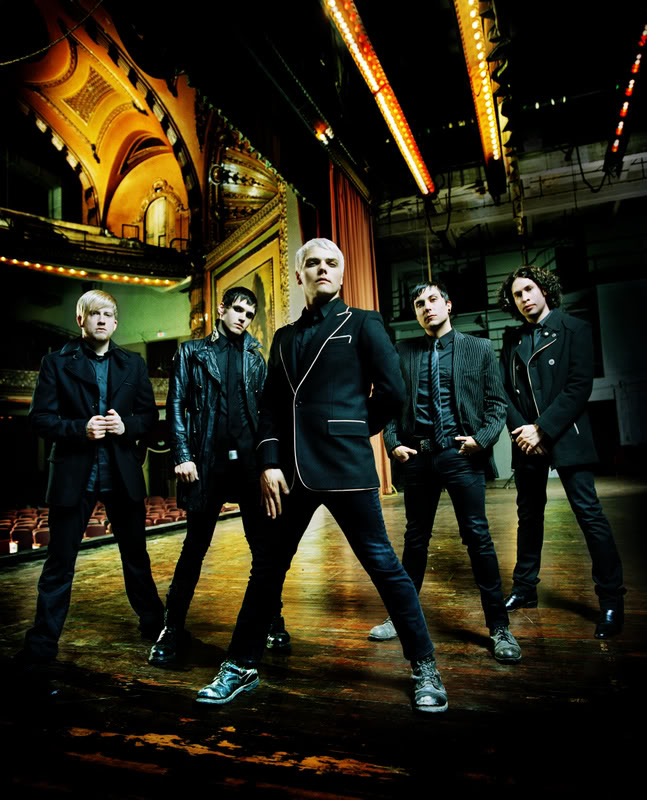 Based in New Jersey, My Chemical Romance is an alternative pop/rock and punk-pop band that has been compared to Thursday and, to a lesser degree, Cursive. Their name was inspired by author Irvine Welsh (of Trainspotting fame), and while many of their songs are loud, fast, hyper, and aggressive, My Chemical Romance’s work also tends to be melodic and pop-minded.

My Chemical Romance got started in the early 2000s, when lead singer Gerard Way and drummer Matt Pelissier decided to try writing some songs together. The first tune that Way and Pelissier — who had been friends since high school — came up with was called “Skylines and Turnstiles” (a post-9/11 song written after Way witnessed the Twin Towers fall while working at his animation job in New York City). Way and Pelissier both felt good about the song, and Way asked guitarist Ray Toro if he would be interested in working with them. My Chemical Romance’s five-man lineup was complete when Way, Pelissier, and Toro joined forces with bassist Mikey Way (Gerard’s little brother) and guitarist Frank Iero. With that lineup in place, the band started playing all around the Northeast Corridor and made plans to begin working on their first album.

Amid their growing popularity, Pelissier departed from the band in mid-2004, and he was soon replaced on drums by Bob Bryar; they’d previously met while touring with the Used, as Bryar was doing sound for the Utah act. Relentless touring continued to increase their fanatical fan following; the band headlined dates with Alkaline Trio, scored an opening slot for Green Day, and shared bills with Story of the Year, Taking Back Sunday, and the Used, among many others. As My Chemical Romance prepared to enter the studio for their third album, they issued Life on the Murder Scene in March 2006. The CD and double-DVD package extensively documented practically everything MCR, including demos, music videos, live footage, interviews, and more; it sufficiently tied fans over until My Chemical Romance (now boasting a sober and bleach-haired Gerard Way) issued the darkly conceptual and highly ambitious The Black Parade that October. Anticipation for the album could barely be contained at the release of its grandiose first single, “Welcome to the Black Parade,” whose elaborate accompanying video looked and sounded like the result of Tim Burton directing Queen. The record went platinum by early 2007.