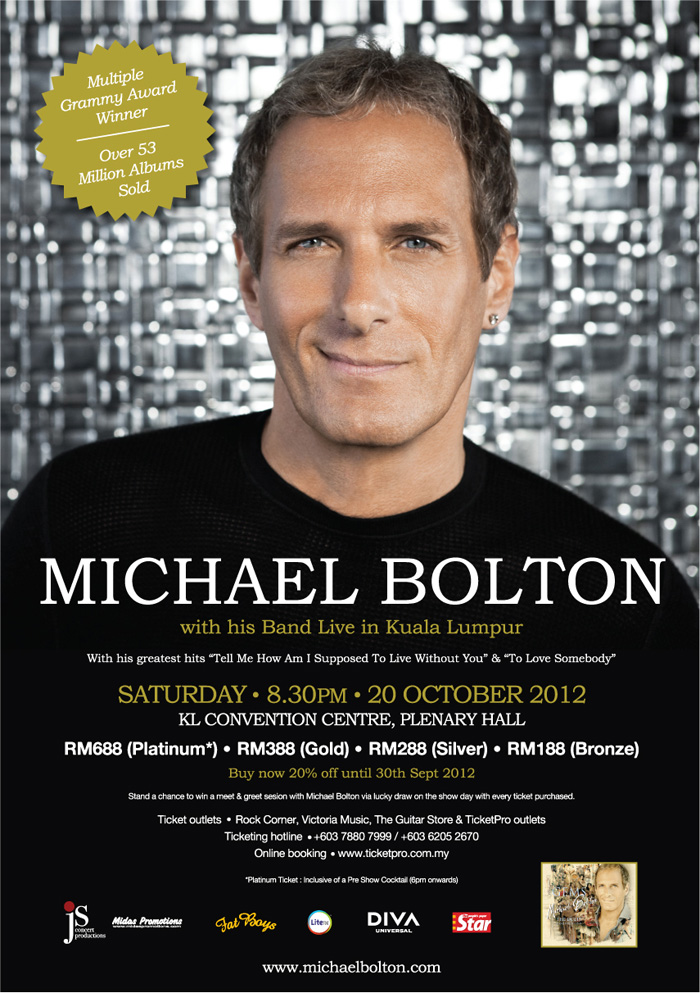 Michael Bolton, is an American singer and songwriter. Bolton originally performed in the hard rock and heavy metal genres from the mid-1970s to the mid-1980s, both on his early solo albums and those recorded as the frontman of the band Blackjack. He is best known, however, for his series of soft rock ballads, recorded after a stylistic change in the late 1980s. He is noted for his distinctive tenor/countertenor vocals.

With multiple Grammys for Best Pop Male Vocalist and more than 53 million Albums and Singles sold, legendary singer, songwriter MICHAEL BOLTON continues to charm and entertain fans all over the world with his live performances. Malaysians will be able to catch MICHAEL BOLTON LIVE IN KL on OCTOBER 20th, 2012 at 8.30 pm; at KL Convention Centre Plenary Hall.

The concert promises to be one filled of his classic all time favourite hits such as “How Am I Supposed To Live Without You”; “Time Love and Tenderness”; “Soul Provider” ; “Said I Loved You. But I Lied”; “How Can We Be Lovers?”; and his own renditions of classic hits by others such as “To Love Somebody”; “When A Man Loves A Woman”; “To Make You Feel My Love”; “Sitting On the Dock Of The Bay”

For his dedication to social activism, Michael has been honoured with several Humanitarian awards. Michael is especially proud of the initiatives carried out by his own foundation, the Michael Bolton Charities, dedicated for 20 years to ending the scourge of violence against women and children in America.