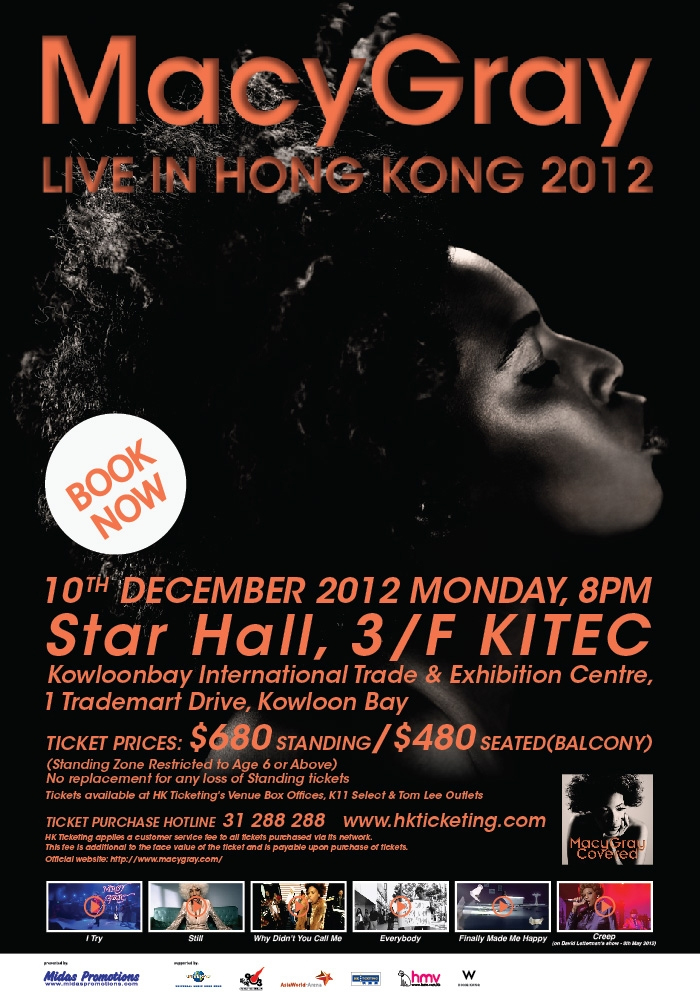 Award-winning American R&B and soul singer-songwriter Macy Gray will bring her unforgettable sensual sounds to Hong Kong for a one-night only show – Macy Gray Live in Hong Kong 2012 on 10 December 2012 at KITEC.

A gifted songwriter and remarkable singer, the mom of three teenagers has been exceeding fan expectation and defying industry formula since kicking off her music career with her debut 1999 CD On How Life Is featuring the classic single I Try. Both the CD and single were massive global hits and helped launch a career that includes two Grammys, two MTV awards, six studio album selling over 15 million units and a thriving acting career.

What awards and sales figures fail to illustrate is the depth and breadth of Macy Gray’s artistry. She has never stopped creating music that leaps genre barriers from experimental soul to alternative rock, from retro-disco to hip-hop. Her artistic integrity and innovativeness has won her fans across the world, including artists such as John Frusciante, Erykah Badu, Gang Starr, Mos Def and Pharoah Monche, all of whom have collaborated with her.

Taking her music to new level, Macy Gray released a new album in 2011 to rave reviews. Covered is a stunning collection of cover songs such as Creep (Radiohead song), Here Comes the Rain Again (Eurythmics song) and Teenagers (My Chemical Romance song), that Macy “would have probably written in another life”. At first glance, it seems strange for Macy to do a covers album but of course she has taken a unique approach in this. The result is a fine selection of wittily reimagined songs. Covered manages to retain the emotional honesty of those songs while artfully reconfiguring the musical contexts, and clearing space for Macy to place her indelible stamp on them.