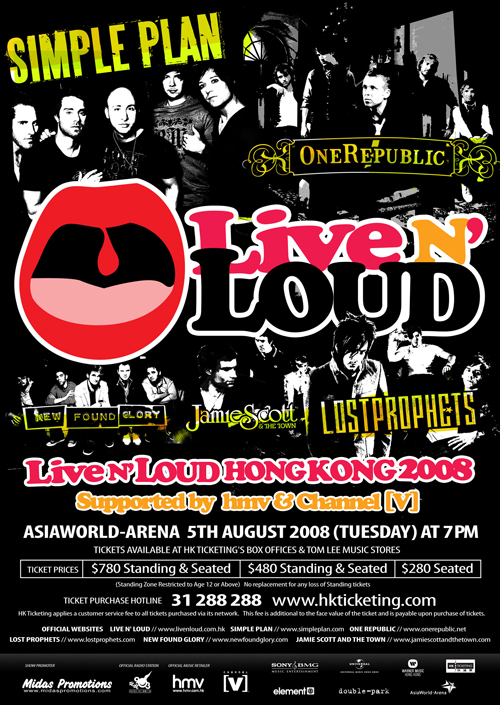 Simple Plan Hailing from Montreal, Canada, Simple Plan comprises of Pierre Bouvier on vocals, Chuck Comeau on drums and backing vocals, David Desrosiers on bass and backing vocals, Sebastien Lefebvre on guitar and backing vocals and Jeff Stinco on lead guitar. The Canadian punk-rock quintet has already sold more than seven million albums worldwide., with a string of No. 1 hits to their credit. The band released their third album “Simple Plan” in February 2008, reaching number 14 on the Billboard charts and still going strong now.

One Republic One Republic’s album is definitely very impressive. First single Apologize, which was remixed by Timbaland, has sold two million legal downloads, maintained its number one position on the Top 40 chart for two months and broke the record for the most spins at radio in just one week, with over 10,000 spins. Based in Los Angeles, the band was formed by five talented musicians: Ryan Tedder on lead vocals, guitar and piano, Zach Filkins on lead guitar and backing vocals, Eddie Fisher on drums and percussion, Brent Kutzle on bass, guitar, cello, keyboards and backing vocals and Drew Brown on guitar.

Lost Prophets British band Lostprophets was formed almost a decade ago in Pontpridd, Wales with guitarists Mike Lewis and Lee Gaze, frontman Ian Watkins, bassist Stuart Richardson and keyboardist and programmer Jamie Oliver. Since its debut album The Fake Sound of Progress in 2000, the band has toured and surprised the world with its phenomenal live performances. The quintet released its third studio album Liberation Transmission in 2006 which became number one album in the UK.

Jamie Scott and the Town The 25-year-old British soul man Jamie Scott first shimmed onto the scene with his first album Park Bench Theories that charted every stage. For a man who first picked up a guitar aged seven and taught himself to play, music was clearly a natural compulsion, and the one he was used to giving in to. He grew up listening to his parents’ classic albums and was influenced by artists like James Taylor, Cat Stevens, Carole King, Wilson Pickett and Donnie Hathaway. His dexterous and soulful voice is somewhere between the likes of Jeff Buckley meets Stevie Wonder.

Don’t miss the chance to be part of this exciting music event. Brought to you by Midas Promotions, LIVE N’LOUD is being held on the 5th of August 2008 at the AsiaWorld-Arena. Midas Promotions will donate HK$50 from each purchased ticket to charity services including support for the China Sichuan Eathquake Relief.