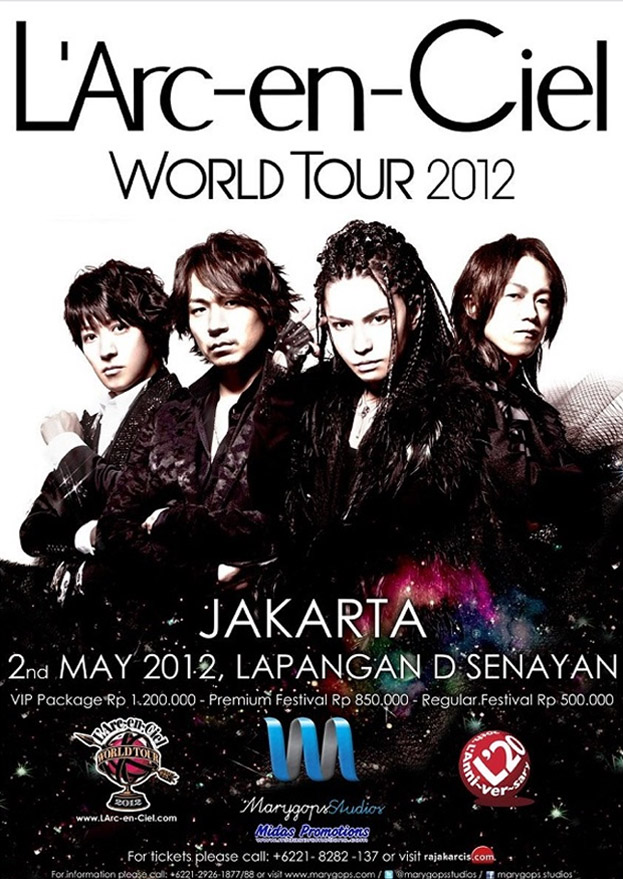 L’Arc-en-Ciel (“The Rainbow” in French, stylized as L’Arc~en~Ciel) is a Japanese rock band formed in 1991 in Osaka. The group has sold over 13 million albums, 16 million singles, and millions of other units, including videos. They were ranked at number 58 on a list of the top 100 Japanese pop musicians by HMV Japan in 2003.

P’unk-en-Ciel (stylized as P’UNK~EN~CIEL) is an alter ego of L’Arc-en-Ciel. Introduced in 2004, hyde takes over guitar, ken the drums, yukihiro plays the bass, while tetsuya performs the vocals. P’unk-en-Ciel’s songs have a more punk sound and their music is usually heavier and faster with a different tone due to tetsuya’s vocals. hyde wears a pirate patch over his left eye in P’unk-en-Ciel performances. yukihiro is known to wear a gas mask; however, this has only been seen once at a live concert during their Smile tour in 2004

P’unk-en-Ciel is the re-visitation of D’ark-en-Ciel (stylized as D’ARK~EN~CIEL), a special event that took place during concerts in the years when sakura was their drummer. The only material released from D’ark-en-Ciel is the 18-minute self-titled B-side found on the (then) unreleased “The Fourth Avenue Cafe” single. Each member was called; DARK TETSU, HYDE DARK, Suck・D’ark・La and Kën D’Ark.

P’unk-en-Ciel songs have been recorded and used as B-sides on singles since 2004 and their performances can be found on live DVDs. They also featured television personality Sayaka Aoki (called P’UNK 青木) in the song “Round and Round 2005”.