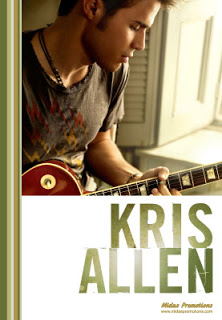 When he was seven years old, Kris listened to a cassette of Michael Jackson’s “Dangerous” and his life changed forever. “I’d be alone in my room and I would sing and dance and try different hats on. I’d stand in front of the mirror and try to moonwalk, but it just didn’t work. One night my dad walked in and caught me. I stopped in my tracks but he thought it was hilarious.”

Kris made it from Hollywood week to the top 36 to the top 12 and survived elimination week after week, heading into the finale with Adam Lambert. When Ryan Seacrest read the name of the winner, after a long pause he said. “Kris Allen.”

Kris’ path to victory included memorable performances of Bill Withers’ “Ain’t No Sunshine,” Michael Jackson’s “Man in the Mirror” and Kanye West’s “Heartless.” Kris was praised by the judges for his original arrangements of such well-known songs. “What I do is completely forget about the original version and ask myself how I can play the song when it comes to phrasing, chord structure and emotion. I hear what it’s going to sound like in my head and run with it.

It’s been an incredible journey for the 24-year-old who came very close to giving up on having a music career. “I was going to return to college and get a decent job so my wife and I could have a comfortable life together, which would have been fine. But things worked out a different way, and I’m really happy!”