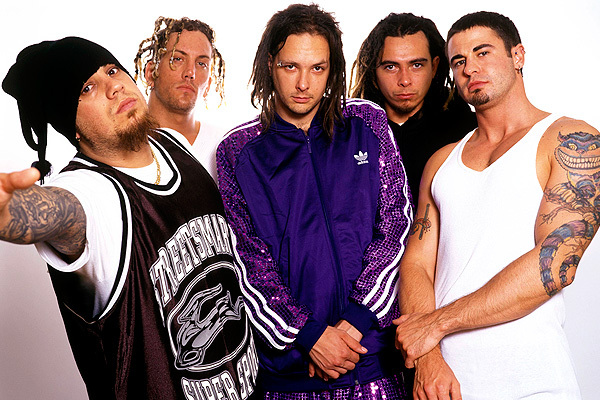 With a raised middle finger to the commercial outlets that snubbed them, emo-funk-core band Korn proved that aggressive 366-days-a-year touring, allegiance to and rapport with fans, and remaining true to yourself and your music will pay off with platinum status–much like metal maestros Metallica.

Korn formed in 1993 in Huntington Beach, Calif., when long-time friends and guitarists James “Munky” Shaffer and Brian “Head” Welch returned to hometown Bakersfield for a visit and stumbled upon vocalist Jonathan Davis fronting local band Sexart. The two convinced Davis, whose day job was as a coroner’s assistant, to sing in their band–which also included former Bakersfield inhabitants David on drums and Fieldy on bass. (The four instrumentalists had previously been the force behind Orange County bands L.A.P.D. and Creep.) Together, they created intense phat grooves with heavy thumping bass, growling vocals and even the occasional bagpipes played by Davis. In 1994, Korn released their self-titled debut, which was ignored by the critics but adored by skaters, punkers and a great many disenchanted youths who could relate to the quintet’s fierce and ferocious music and cathartic lyrics.

The proof’s in the pudding, or in the record sales in Korn’s case; proving Korn are a viable and important force in today’s alternative music, Life Is Peachy is nearing platinum status (selling 10,000 to 20,000 units a week), and with a headlining main-stage slot on Lollapalooza ’97, the record will certainly reach one million by summer’s end.

From their music and lyrics (especially the first album’s “Daddy,” a tearful song about Davis’s relationship with his father, and the follow-up’s “Kill You,” this time about revenge on his step-mom) Korn seem to comprise five massively sick and depressed motherf?!kers, but, with raised middle fingers and smirks of success, they’re pretty content traveling the world in an air-conditioned tour bus. (Jonathan Davis also collaborated with the hipster Dust Brothers on “Kick The P.A.,” a song for the Spawn soundtrack.)