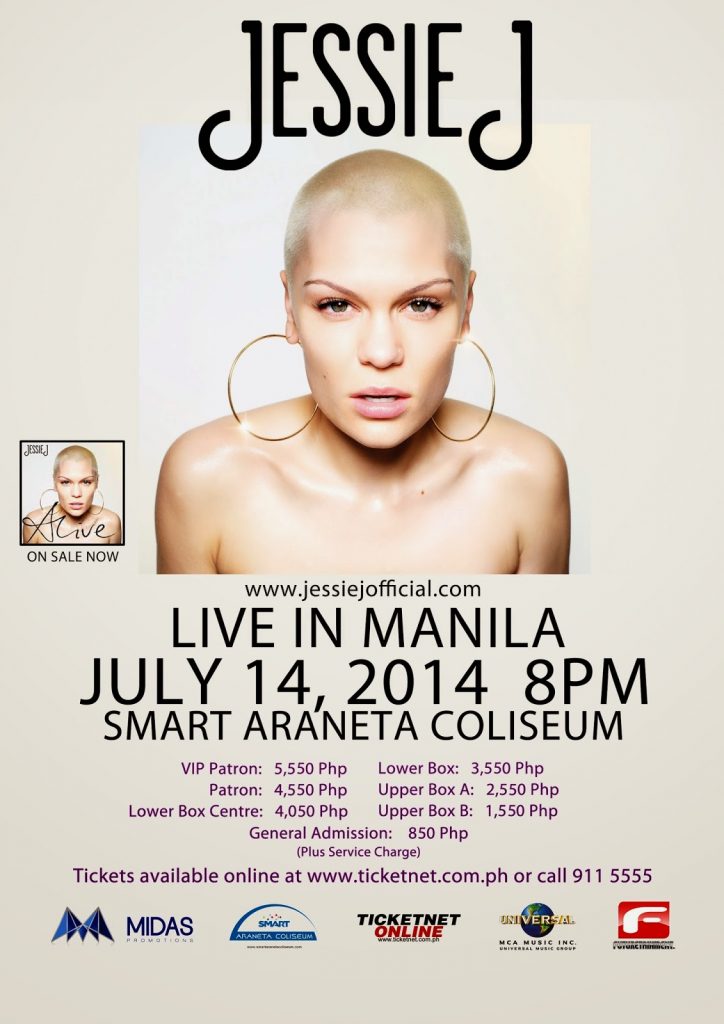 After numerous number one singles and a debut album that headed straight for the top, selling millions worldwide, show-stopping performances in front of a global audience of billions at the Olympics and extraordinary acts for charity that hit the headlines, London-born songstress Jessie J shakes up Manila in “Jessie J Live in Manila on July 14, 2014 at the Smart Araneta Coliseum presented by Midas Promotions in cooperation with Futuretainment, Inc.

The 26-year-old pop star burst onto the scene in 2011 with the explosive single, “Do It Like A Dude” in a feisty performance with a video so strong there was certainly no ignoring this talented new singer-songwriter, surfing between tough RnB and rap. That was followed by “Price Tag”, the anti-materialistic anthem of its year, and an album that sold in its millions going platinum several times over. But that was just the beginning of a journey that would see Jessie become the first British woman in history to take six top ten singles from one album and never mind that it was her first outing.

To add to those achievements are some pretty impressive statistics: coming up for 15 million sales, a Brit, the BBC Sound of 2011 award, two number one singles in the UK, number ones in no fewer than 19 countries, a number six hit in the US with “Domino”. There are many more. We could go on. And that’s not to mention her part in The Voice UK, the highly-rated BBC1 Saturday night prime-time show where she has mentored hopefuls alongside legends like Sir Tom Jones and will.i.am.

The former Voice UK coach also released her second studio album Alive in September and shaved off her trademark bob for Comic Relief, donating the hair to be woven into wigs for children who had lost their hair during cancer treatment. “I wrote my first album when I was 18. This is definitely more mature,” she said of her new record on which she wrote and worked on with the likes of Rodney Jerkins, Claude Kelly and Stargate.