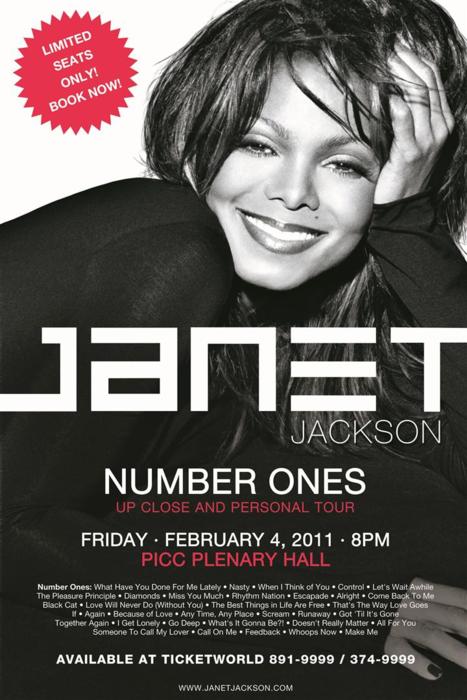 An icon, a trendsetter, a businessperson, a multi-gifted artist: songwriter/producer/singer/actor/dancer. Janet burst onto the scene with her record setting album, “Control.” Today she possesses an unprecedented list of achievements, and remains in the forefront of her craft, a true inspiration. As an artist, Janet excites, enlightens, leads, and embraces her fans with insights into life’s meaning and our deepest feelings.

Janet is ranked as one of the top ten best-selling artists in the history of contemporary music.  Her musical style, choreography, lyrical exploration, and self awareness has made her one of the top artists of our time as well as a leading influence on the upcoming stars of tomorrow. Summarizing her career and her incredibly raw albums, Janet has said, “Here I am. I’m coming on. Musically, I have it. You want it. And I’m giving it to you.”

Through words and actions, she has set an example of generosity, of empowerment, of tolerance, and helped to lead efforts addressing some of society’s greatest challenges. Born Janet Damita Jo Jackson in Gary, Indiana, she has accumulated the success and the stature to be addressed by just her first name, Janet.

Janet began her career at the young age of seven when she appeared at the MGM in Las Vegas with her family in 1973. This debut and her appearances beginning at the age of nine on her family’s variety show, The Jacksons, lead her to starring and supporting roles on hit sitcoms such as “Good Times,” “Diff’rent Strokes” and “Fame.”