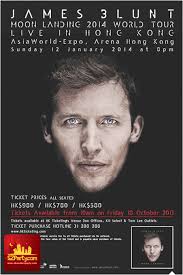 James Blunt debut album, Back to Bedlam and single releases, including “You’re Beautiful” and “Goodbye My Lover”, brought him to fame in 2005. His repertoire is a mix of acoustic-tinged pop, rock and folk. After recording on the independent American label Custard Records, Blunt won two Brit Awards, two MTV Video Music Awards, two Ivor Novello Awards, and by 2006 was nominated for five Grammy Awards.

His latest album was released in October 2013, with lead single Bonfire Heart, it joined BBC Radio 2’s playlist and received promotion on BBC One’s magazine show The One Show.

Overall critical reception has been mixed, with Allmusic saying, in a positive review, that “Some Kind of Trouble is a step in the right direction for Blunt, a move toward love songs free of pretension” whilst BBC Music felt “When all’s said, Some Kind of Trouble is not a terrible record by any means, but there’s little sense that Blunt has advanced, and equally little sense that it’ll make any difference to his bottom line.

Blunt has just finished recording his fourth studio album, entitled Moon Landing, as revealed by the singer in an email to fans. It is due for release in October 2013 and will feature production from Back to Bedlam producer Tom Rothrock. The lead single, “Bonfire Heart”, was released on 7 October 2013, and charted at 6 in the UK singles chart.