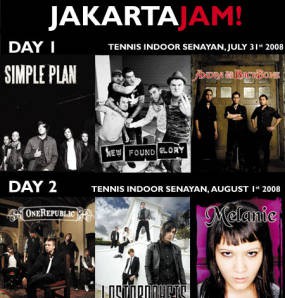 One Republic One Republic’s album is definitely very impressive. First single Apologize, which was remixed by Timbaland, has sold two million legal downloads, maintained its number one position on the Top 40 chart for two months and broke the record for the most spins at radio in just one week, with over 10,000 spins. Based in Los Angeles, the band was formed by five talented musicians: Ryan Tedder on lead vocals, guitar and piano, Zach Filkins on lead guitar and backing vocals, Eddie Fisher on drums and percussion, Brent Kutzle on bass, guitar, cello, keyboards and backing vocals and Drew Brown on guitar.

Lost Prophets British band Lostprophets was formed almost a decade ago in Pontpridd, Wales with guitarists Mike Lewis and Lee Gaze, frontman Ian Watkins, bassist Stuart Richardson and keyboardist and programmer Jamie Oliver. Since its debut album The Fake Sound of Progress in 2000, the band has toured and surprised the world with its phenomenal live performances. The quintet released its third studio album Liberation Transmission in 2006 which became number one album in the UK.