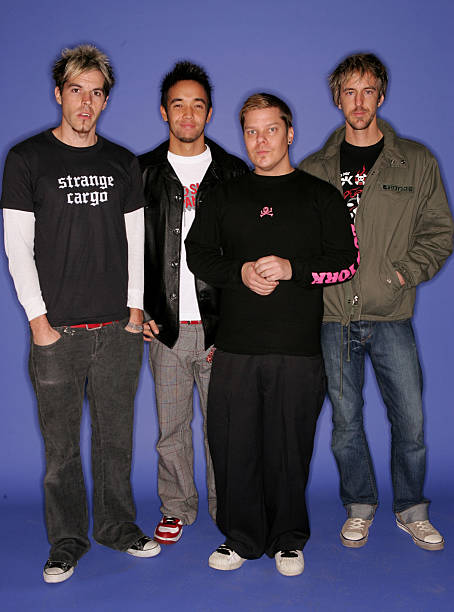 Their band doesn’t have a normal name, but the four guys of Hoobastank are normal guys. They have normal lives, they do normal things, and they have the same sense of humor as their fans. That’s why Hoobastank-guitarist Dan Estrin, bassist Markku Lappalainen, drummer Chris Hesse and singer Doug Robb-connect with them.

Their songs have that intangible ability to speak for and to the things that normal kids think and feel.

Formed in the mid-1990s in the Los Angeles suburb of Agoura Hills, while the quartet was still in high school, Hoobastank has since grown into a songwriting machine. Lots of time on the road has made them tight and the meticulous nature of Estrin and Robb-both of whom holed-up in their home studios, trading demos back and forth-guaranteed that The Reason’s songs would have both muscular rock and melodic finesse. According to Robb, “the heavier songs are heavier and the softer songs became softer. If the first album was sort of middle-of-the-road, this one rides on both side of the road.”

There’s plenty of hard-ass rock on The Reason, from the torrential guitar and lofty hook of “Just One” to the blast of “Same Direction” and the near-epic “Disappear,” there’s a lot to rock about. As for the softer side, there’s the sweeping grandeur of the title track, which features a circular guitar arpeggio and Robb’s soaring vocal line, it’s an apology cum love song that they don’t make too many of these days. They also recorded a version of Rod Stewart’s “Do Ya Think I’m Sexy,” which didn’t make the record. They were originally asked to cover it for Deuce Bigalow, Male Gigolo “It’s not something we want to be known for, but we’re holding it for something good. Maybe for the sequel…Deuce Bigalow, Electric Boogaloo.”