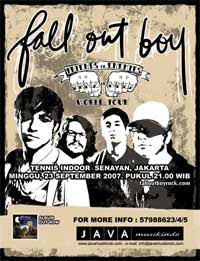 The accolades didn’t stop there. Fall Out Boy won 3 Teen Choice Awards, and the video for “Dance, Dance” won the MTV Video Music Awards for Viewer’s Choice, and was nominated for Best Group Video. For all their success, the band members have stayed true to their roots; not in the sense that they haven’t changed, but in the sense that they’re making music they love to hear and aren’t changing to appease the tides of trend. Fame has never been the driving force behind the music for the band, and all the recent success hasn’t quite sunk in yet. “I don’t think of music as a career,” Wentz says, “until certain things jar it for you.” When pressed for an example, he cites the thousands of screaming fans who greet him when he gets on stage.

The success of their mega hit album From Under the Cork Tree hasn’t been taken for granted. Instead of resting on their laurels, Fall Out Boy has opted to go immediately back to work in spite of a hectic tour schedule by releasing their next album, Infinity on High. “If you have the songs there, why not record them?” says Wentz. The group’s prolific nature can best be summed by Stump, who enthusiastically proclaimed, “fuck down time,” when asked if he’d like a break from the busy schedule.

The title of Infinity on High comes from a letter written by Vincent van Gogh to his brother in 1888. In the letter, Van Gogh describes the energy instilled in his work due to his new bill of health. Specifically, the line, “Be clearly aware of the stars and infinity on high. Then life seems almost enchanted after all.”