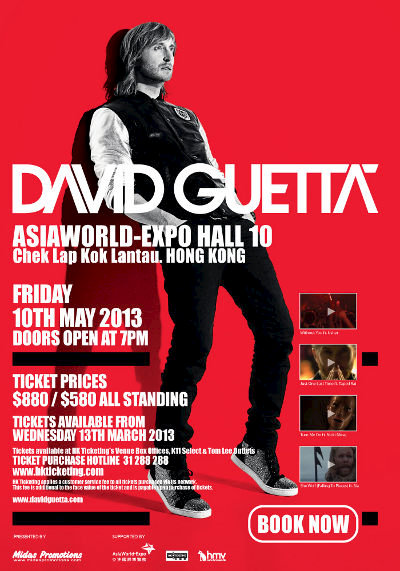 David Guetta is a French house music producer and disc jockey (DJ). Originally a DJ at nightclubs during the 1980s and 1990s, he co-founded Gum Productions and released his first album, Just a Little More Love, in 2002. Later, he released Guetta Blaster (2004) and Pop Life (2007).

David Guetta has sold over six million albums and 15 million singles worldwide. In 2011 Guetta was voted as the #1 DJ in the ‘DJ Mag Top 100 DJs’ fan poll

Guetta’s fifth studio album, Nothing but the Beat was released on 30 August 2011. It was released as a double-disc album; one disc being vocal and the other being electronic. The French DJ was inspired by rock bands such as Kings of Leon and Coldplay to add rock influences to his dance productions. “Where Them Girls At” featuring Nicki Minaj and Flo Rida, the first single off the album, was released worldwide on 2 May 2011.

“Little Bad Girl”, featuring Ludacris and Taio Cruz, was released as the second single on 28 June 2011. The third single, “Without You” featuring Usher, was released on 27 September 2011. Guetta also released three promotional singles for Nothing But the Beat which were “Titanium” featuring Sia, “Lunar” with Afrojack, and “Night of Your Life” featuring Jennifer Hudson. The album also features the hit singles “Sweat” with Snoop Dogg and “Turn Me On” with Nicki Minaj.