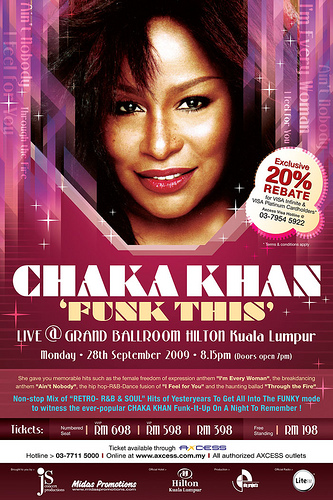 Say the name “Chaka” and most folks in the know instantly think of a woman who has made an indelible and lasting impression on the music scene of the past three decades. First, as the lead singer of the massively successful R&B, funk and pop band Rufus, then as a solo artist in her own right who has influenced an entire generation of female vocalists (think Mary J. Blige, Erykah Badu, Ledisi, Maysa among others). Like Aretha, like Joni, like Tina, a first name will do.

For there’s only one Chaka, woman of fire, possessed of a powerhouse, unforgettably distinctive trademark vocal style who sings with unrelenting passion, honest emotion and authenticity; no matter what the song, you can count on Chaka to deliver with realness, every time. In addition to the Chaka Khan Foundation, Chaka is also responsible for her own line of chocolates (“Chakalates”), sold in Neiman Marcus Stores and the guiding force behind her own Earthsong record label.

Honored by BET with a much-deserved “Lifetime Achievement Award,” Chaka’s enduring spirit and passion for music and life have endeared her to music lovers the world over. “Music has always been the background theme to life,” she states, “and people are profoundly affected by what they hear. I think I always knew I’d forever be doing this. It’s what I was put it for.

It’s always been kind of like a ministry – now it’s a conscious one,” she says referring to her own recent life changes. “Every song on this new album has a message, an in-depth message which can be applied to many things in life. Every word is heartfelt and I didn’t sing anything I didn’t feel.” The provocatively-titled FUNK THIS is, she says, “the album I’ve been promising my fans for the past ten years.” And the kind of funk on the CD? “It’s funk of many kinds with a wide range of different feelings. It’s soulful, soul-felt and from my soul.” That about says it all!