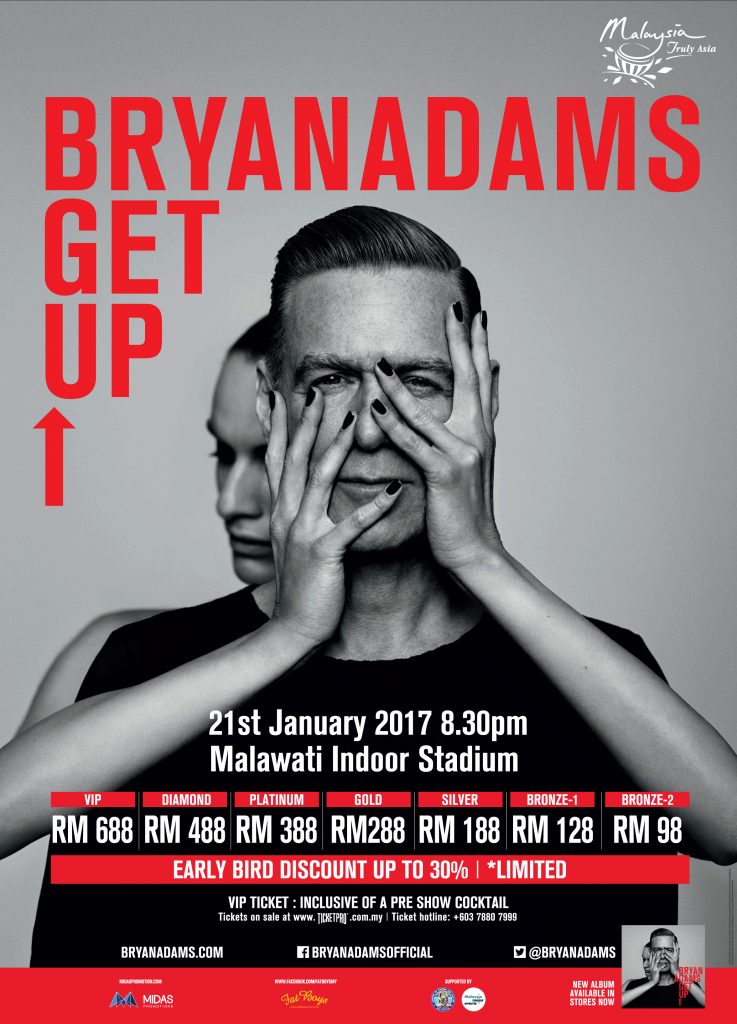 Bryan Adams ‘The Get Up Tour’ Live in Malaysia 2017

Bryan Adams ‘The Get Up Tour’ Live in Kuala Lumpur will be held on 21st January 2017 at 8.30pm at the Malawati Indoor Stadium, Shah Alam.

Bryan Adams is set to release his thirteenth studio album, Get Up (UMe) produced by famed ELO frontman Jeff Lynne and co-written with his long-time collaborator Jim Vallance, the album features nine new songs and four acoustic versions. Get Up is available for pre-order now via all digital partners and includes instant-grat track “You Belong To Me” The album’s lead single, “Brand New Day” is available now and is supported by the official music video directed by Adams and featuring BAFTA Award-winning actress, Helena Bonham Carter along with musician Theo Hutchcraft from acclaimed synth-pop duo Hurts.

As Canada’s best-known ambassador, Adams has spent the last three decades making music history. He has sold upward of 65 million records, toured six continents and achieved #1 status in over 40 countries around the world. He has been awarded the Order of Canada, has been inducted into the Canadian Music Hall of Fame and has a Star on Canada’s Walk of Fame. Adams has also been nominated for — and won —several Academy Awards, Golden Globes and Grammy Awards. He has a Star on the Hollywood Walk of Fame and has been inducted into Wembley’s Square of Fame.