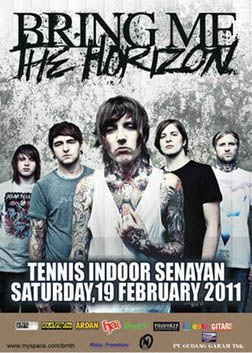 Bring Me the Horizon Live in Jakarta 2011

Fronted by a tattooed clothing designer and influenced by death-metal, grindcore, and emo, Bring Me the Horizon isn’t the average deathcore band. The group was formed in 2004 from the ashes of several Sheffield-based outfits, with the 2003 Disney film Pirates of the Caribbean serving as the inspiration for the band’s name.

The resulting album, There Is a Hell, Believe Me I’ve Seen It, There Is a Heaven, Let’s Keep It a Secret, was released during the latter half of 2010, several months after the band wrapped up its engagement with the Warped Tour.

With its second album, Suicide Season, Bring Me the Horizon moved in a more accessible direction and wound up cracking the U.K. album charts. Not everyone approved of the new sound, though, and Ward left the band in early 2009. His temporary replacement was Jona Weinhofen, formerly a member of I Killed The Prom Queen. Weinhofen ended up staying with the band as a permanent member, and the group returned to the studio with producer Fredrik Nordström in March 2010 to begin work on a third album