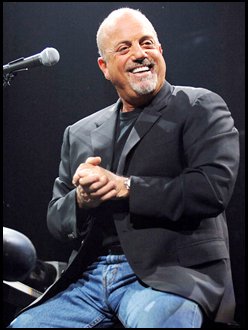 Iconic singer-songwriter Billy Joel to make his debut at AsiaWorld-Arena and give Hong Kong viewers a rare chance for a spellbinding night performing his Greatest Hits, live!

(Hong Kong, 27 Aug 2008) Being a six-time Grammy Award winner from the ‘70’s through to the ‘90’s and having sold more than 100 million records over the course of a career spanning more than 40 years, Billy Joel proves his music never goes out of style. In July, he played the last concert at Shea Stadium for nearly 125,000 fans. Tickets sold out soon within an hour and grossed over US$12 million. Performing for the first time in Hong Kong, “Billy Joel Live in Hong Kong 2008” will be the ultimate show with a mix of timeless songs and a classic performance will be held on 12th November 2008 at the AsiaWorld-Arena.

In addition to hugely successful records, Billy has released his new single “All My Life” recently, the first new song since his 5x platinum Grammy-nominated album “River of Dreams“, was released in 1993. It was produced by longtime musical associate Phil Ramone. Fans will have the chance to experience the song played live in Billy’s stunning performance.