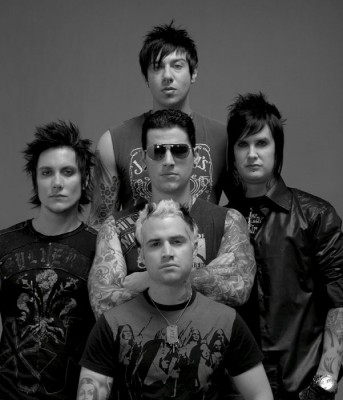 It’s not always recognized in today’s “I want it all now” world, but patience is a virtue. And Huntington Beach, California rockers Avenged Sevenfold are being rewarded for remembering that golden rule. After releasing two highly successful albums on an indie label (Sounding The Seventh Trumpet and Waking The Fallen), the quintet is set to unleash its major label debut, City Of Evil, on Warner Bros. Records. City Of Evil, co-produced by Avenged Sevenfold, reunites the group with producer Mudrock (Waking The Fallen).

Those looking primarily for a cathartic release live, as so many of the kids moshing their brains out at the Music Box were, need only turn to the ferocious energy of “Bat Country,” a song written for Hunter S. Thompson about the band’s own adventures in Vegas, and the Maiden-esque guitar and Shadows’ perfect caterwaul of the line “city of evil” (where the album’s title stems from) in the opening “Beast & The Harlot.”

Hard work is what also accounts for the band’s fiercely loyal following, according to Shadows. “It’s rewarding ’cause you know you have this really solid core fan base that has been through a lot and they believe in the band now as more than a band, it’s like a lifestyle,” he says. “If anything happens we don’t ever fall, it’s like they’re holding us up. We?e not on the radio, but everywhere we go we always have this rabid group of fans. We would’ve never had that if we had some lucky break and just jumped to the point we’re at now. I hope it gradually keeps going up. The slower you go the more I think it builds underneath you and we’re grateful for that. They can’t just get pulled out from underneath us. There’s nothing you can grab to pull; it’s fans that love that band. So, it’s very gratifying to be at this place now.”